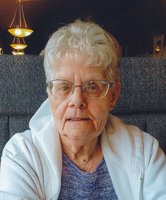 Elaine was born in Torquay, Saskatchewan in September, 1943 to Oliver and Lulu Hanson. She was one of 8 children. She grew up in Torquay and Outram where she attended school. She left school at Grade 8 and moved to Estevan, SK, where she started babysitting. There she met Irvine Spalding and married on June 17, 1961. Elaine and Irvine had three girls: Cathy, Sally and Darlene. Sadly, Darlene passed away at only 3 months of age. On April 16, 1972, the family moved to Nipawin, SK where Elaine & Irvine started a Septic Tank Business. Mom’s life was very busy answering the phones, doing the books and of course, looking after the girls. In January, 1976, another baby girl, Charlene was born, which came as a very big shock to the rest of the family. Irvine passed away on November 22, 2009. A year later, Elaine moved into Pioneer House in Nipawin. She really loved living here as she met and made many wonderful friends here. She especially loved coffee time and special gatherings. Elaine’s hobbies included doing puzzles, puzzle books, coloring and playing cards. Elaine was predeceased by her parents: Oliver and Lulu Hanson; her Husband, Irvine; her daughter, Darlene and her son-in-law, Dylan McNabb. Elaine leaves behind to cherish her memory her daughters: Cathy (Randy), Sally (Randy) and Charlene (Gary); her grandchildren: Jonathon, Dwight, Ashley, Kimberley, Trina, and Sean; her great-grandchildren: Suri, Kaden and Bria; her sister, Clara; her brother, Walter; her sisters-in-law; numerous nieces, nephews and lots of special friends. Elaine passed away peacefully at the Nipawin Union Hospital. The family is very grateful to the staff and her fellow co-workers for treating their mother with such great care. There will be a private family service only.