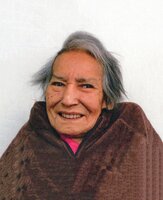 Gertrude (Gertie) Bella Dorion was born in Cumberland House, Saskatchewan. She was the daughter of Mary Dorion (nee Pelly) and Gabriel Dorion. Gertie grew up in a family of seven children. Her mother was a homemaker who made bannock every day. Gertie’s father was a trapper, fisherman, hunter, and a World War II Veteran. Family was central to Gertie’s life and she was so happy when her only son was born. Raymond Dorion grew up with a cousin-brother Redman, son of Lily. Gertie and her sister raised their boys together and enjoyed time with grandchildren. Gertie attended Charlebois School and then worked as a babysitter for forty years. She kept care of children for many families over four decades. It was an easy job because she loved children. In her spare time, Gertie liked to visit, play bingo and cards, and watch television with her sister Lily. With family and elders at her side, Gertie passed away peacefully in July of 2022 in Nipawin, Saskatchewan. Gertie leaves behind to treasure her memories: her son, Raymond; her best friend and sister, Lily; her brothers, Benjamin and Bobby; her nephew, Redman (Nikki) Dorion; Lily’s grandchildren who also called her nogom, Austin, Danis, Daniel, Redman Jr., John, Vernon; the Dorion family from Pelican Narrows; her aunties, Mary McKenzie, Hazel Head and Sylvia Settee; numerous cousins; and Wayne and Mitchell Dussion, whom she considered as her grandsons. Gertie was predeceased by her parents, Gabriel and Mary Dorion; her siblings, Nancy, Rod, John, William; and infants, Charlotte and Gus; her grandparents, Henry (Mary Jane) Dorion and Andrew (Bella) Pelly; her uncles, Zacheus (Agnes, Rachel) Pelly and Stanley (Mary) Pelly; her aunties, Katie (Baptiste) Budd and Catherine (Thomas) Cook; and her cousin, Mary Anne Pelly. The Dorion family wishes to thank the Pineview Lodge and Cumberland House Clinic Staff for taking good care of Gertie. They also acknowledge all the Cumberland House residents at Pineview Lodge and Ryan Carriere from the Metis Nation of Saskatchewan for support and prayers in time of need.