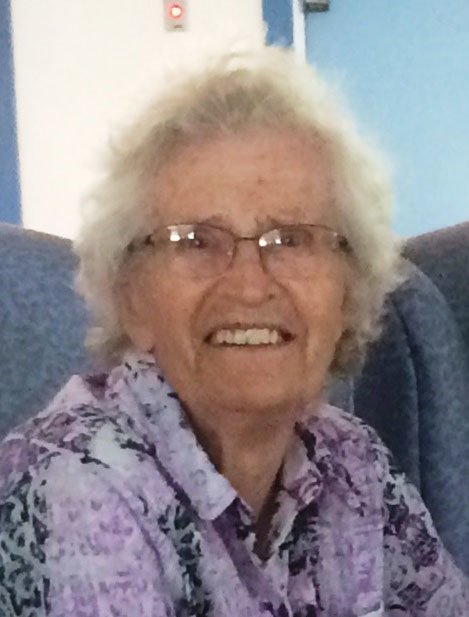 Please share a memory of Helen to include in a keepsake book for family and friends.
View Tribute Book

Helen Hilda Pearse was born May 19, 1931 on the family farm Sec.9, Tp.47, Rge 13, W2, to parents Rose (Reuther) and Bernard Burns. She was the third youngest of ten children; they struggled as many families did in the thirties, but they were very close. Helen and her siblings attended the Goyer School.

When Helen was quite young she got blood poisoning from an injury to her heel. She spent a long time in hospital and then recovered for a while (by coincidence) in the very house she and Ned would eventually live in, in Eldersley. It was from this time in hospital that she learned much useful medical knowledge and a real gift for caring for others. She always had a cure for what ailed you, even if it was just one of her “hot toddies”.

Helen started working at the bee farm of Frank and Dora Pearse in Silver Stream, extracting honey. Here she met Frank’s son, Ned, and not long after the two were married. They made a home just a half mile north of Frank‘s, and began their own family of five children; Allan David (Dave), Tanya Belle, Liza Jane, Darcy Anne, and Cindy Louise. Family life was never boring; lots of noise, lots of fun, lots of animals and lots of love.

She and Ned were beekeepers in the Silver Stream area until 1978, when they moved into Tisdale. Helen and Ned worked well together and they continued beekeeping in Eldersley, as well as doing some janitorial and mail contracts. She enjoyed spending time at Bjorkdale trekking the trails in the bush quarter, travelling to visit relatives, even going to the Yukon to see Bob at a northern gold camp, and to Montreal to see her grandson graduate from the Navy.

Helen was giving of her time and her kindness. Helen was involved with the S.A.M.R. for a number of years and was a past president. Her family has had its ups and downs with health issues, and she was always there to help, above and beyond, always.

Helen was still involved in the family beekeeping operation until she was in her eighties! She was an active and vibrant woman. Helen was a very loving mother and grandmother. She spent a lot of time with each of her grandchildren, and was very involved in their lives.

Helen suffered from dementia later in her life, and it was necessary to move into nursing home care for her final years. The nurses and care staff at Newmarket were very kind and compassionate, making her final days as comfortable as possible, and for that her family is truly grateful.

Our memories may fade, but we never forget in our heart.

Share Your Memory of
Helen
Upload Your Memory View All Memories
Be the first to upload a memory!
Share A Memory