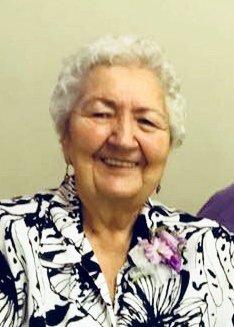 Please share a memory of Pearl to include in a keepsake book for family and friends.
View Tribute Book

Pearl Chabot was born April 29th, 1936 in Dysart, SK, to John Stoicescu and Lena Morris. Her parents farmed there than moved to Mossy Vale area for several years. Then they moved to Regina for four years where she started her education. Again, they returned and she would go to Mossy Vale school.

In 1952, Pearl moved to Zenon Park to work for Ernest and Stella Chabot for two years. Then she went to the new hospital in Zenon Park and lived, trained and worked as a nurse with the Nuns. They quickly became her family. In August of 1954, Pearl almost died from a severe case of polio; but thankful to God, Dr Mandin’s incredible knowledge and the great care by the sister’s she pulled through with no side effects (her words).

In 1960, with 3 kids, they moved back to Zenon Park to live with René’s Mom for one year, then bought their homestead, a half section of land in the Ditton Park area. They had a family of six but raised a family of eight including many foster children.

An amazing seamstress, Pearl was knowledgeable and meticulous in all she did. Pearl managed the ZP Industries and later began – Pearl’s Upholstery – setting up shop on the farm, even teaching courses.

Pearl took an active role in family/farm/church/school/town/community; also in the fields her kids would pursue whether – music/ construction/ restaurant/ greenhouse/ etc. Pearl organized many events especially preparing food – for large or small crowds. Pearl’s home was always opened and she hosted many people at home and abroad. Her hospitality was second to none. She never missed an opportunity to be of service to others except when her health would not permit but even then. She had a contagious love for life. Pearl passed away on December 15th, 2018 at the Nipawin Hospital, surrounded by her family.

We feel truly blessed by God throughout our years of joys, work, and struggles.  In our home, we believe in Faith, Family and Friends.

“All things come together for good to those who love & trust in the Lord.”

Share Your Memory of
Pearl
Upload Your Memory View All Memories
Be the first to upload a memory!
Share A Memory