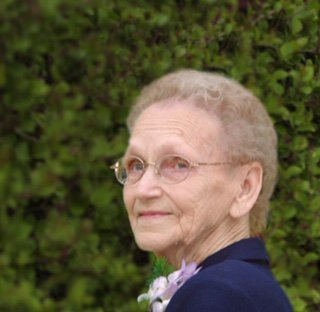 Please share a memory of Elizabeth to include in a keepsake book for family and friends.
View Tribute Book

Elizabeth (Betty) Leslie was born on February 25, 1924 to Jacob and Anna Ens at Osler, SK., the eighth of sixteen children.  The family later relocated to the Carrot River/Causeway area where Betty attended school.

In Betty’s late teens she worked as a waitress at the Welcome Café in Nipawin, where she met her soon-to-be husband, Alex Leslie. They were wed on October 30, 1943, settling on the Leslie family farm west of Pontrilas where they raised a family of seven children. Besides the farm, they managed the Spooner Post Office for seven years, and later the Codette rural postal route. Betty and Alex enjoyed visiting with their friends and neighbours, and spent many evenings out square dancing with the Hilltoppers of Codette.

Betty loved farm life, and particularly enjoyed peaceful hours spent gardening and berry picking. She was a fabulous cook and was known by family and friends for baking the best cinnamon buns in the land. Her quiet and kind nature led to a rewarding career as a caregiver, where she worked for both Home Care and Pineview Lodge from 1977 to 1989. She retired in 1989 following illness and surgery, but emerged a cancer survivor.

Alex and Betty moved to Nipawin in 1984, selling their farm later in 1990. They enjoyed many northern camping and fishing trips with family and friends during their retirement years until Alex’s passing in 1994.

Betty cherished her close relationship with her sister, Marg, and together they did a bit of travelling, and enjoyed many bingo nights and card games with friends. She also bowled weekly for several years with her sisters Marg and Kathy. Betty treasured her solitude and, when alone, was a wizard at jigsaw puzzles.

When her health no longer allowed her to live alone, she moved to Connie’s Care Home in Humboldt, then to Mak Lodge in Prince Albert, and finally to Jubilee Lodge in Kinistino where she passed away peacefully on April 1, 2019.

Share Your Memory of
Elizabeth
Upload Your Memory View All Memories
Be the first to upload a memory!
Share A Memory