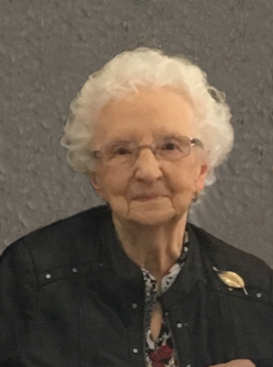 Please share a memory of Nelly to include in a keepsake book for family and friends.
View Tribute Book

Nelly (King) Henderson was born November 8, 1918 at New Osgoode to Frederick & Agnes King.  She grew up and took her schooling in the Preston School district.

October 29, 1940, she married George Henderson and to this union 2 children were born – daughter Beverley in 1943 and son Ronald in 1947.  After George returned home from World War II, they farmed south of Ridgedale from 1945 until 1967 when they moved to B.C. and lived there until Georges passing in 2006.  Nelly moved to Cedar Manor in Nipawin in 2007 where she resided until entering into Pineview Lodge 2016.

Nelly loved being around horses and dogs even helping her Dad deliver milk in Ridgedale.  Besides being a farm wife and helper Nelly was an Avon dealer for Ridgedale area for a number of years.  Nelly loved music especially Elvis and Daniel O’Donnell.  Her toes were always tapping whenever the bands came to play at Pineview.  She loved dancing, playing cards, bowling and bingo.

Nelly was predeceased by her husband George, grandson Gary Cruikshanks, her 3 brothers and one sister, one brother in law, and 4 sisters in laws.

Share Your Memory of
Nelly
Upload Your Memory View All Memories
Be the first to upload a memory!
Share A Memory