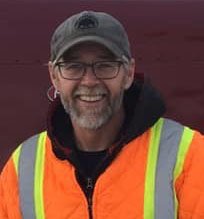 Please share a memory of Rodney to include in a keepsake book for family and friends.
View Tribute Book

Rodney Blair Cranch was born on July 3rd, 1963 in Watrous, SK to the proud parents Gerald and Arlette Cranch.  Rod is the third of four children born. When he was 4 months old, they made their move to Nipawin, SK, then Rod spent the rest of his life where he made Codette, SK his home. Rod received his education in Codette, SK from kindergarten to grade 6, then high school in Nipawin, SK. Rod had two children, Sheldon in 1981 and Shawn in 1985.

Rod and his partner, Moreen, reconnected in 2014.  They enjoyed all their time together joking, laughing and talking about anything and everything.  They especially loved rides on his Harley. Moreen will always remember Rod as a loving, kind-hearted, down to earth, gentle partner. Rod, Mo, and Kayla enjoyed big weekend breakfasts, they also loved to go fishing with Dexter, camping, sledding, and spending time together as a family.  Kayla adored Rod - she will always remember how he could fix absolutely everything! She remembers him being the hardest working man she ever knew, how he had an unconditional love for her and her mom.  Rod accepted Kayla as his own and often would refer to himself as "dad" in his texts.

Rod’s career was very successful throughout his life. He started off with Baxter Farms, and with Bill & Jean Perkins farm. He then worked for Doug Welshman where he did masonry work, and for a brief period he worked as a masonry with Danny Hobbins. Then Rod moved on to the trucking world where he followed in his dad’s footsteps and where he received his truckers license with his dad Gerald.  Rod and his dad Gerald drove truck with Nelson Trucking for a while, and throughout that time he had worked with various trucking companies. In between that time, he opened up his own tire shop called ‘Nipawin Tire Center’ which he had for a few years and then went back to what he loved most which was trucking. Where Rod purchased his first truck with Fremont Trucking, then he worked with Tri-Line Trucking where his eldest son Sheldon received his license with his dad and then bought his 2nd truck. Rod and Sheldon drove team with Kindersley Transport together for a period of time then Rod moved on and drove for Prall Trucking, Dyvek, and after he worked for Stafford Trucking, Gene Rusk, and now with Fremont Trucking.

One of Rod’s favorite things to do with his sons Sheldon & Shawn was to go and get fire wood every Sunday for Grandpa and Grandma Cranch’s wood stove. Rod also enjoyed spending time tinkering around in the garage with his son Shawn. Shawn doesn’t remember a time in his 34 years of life that he wasn’t learning or spending time together in the garage with his dad. Rod instilled the value of hard work into both of his sons. He was always building or repairing something. His hobbies also included curling, baseball, fishing, sledding, camping and water sports with his family, and riding his harley. Rod never stood still, he was always doing something, and had energy that never ended.

‘He will be forever loved, forever missed’

Share Your Memory of
Rodney
Upload Your Memory View All Memories
Be the first to upload a memory!
Share A Memory