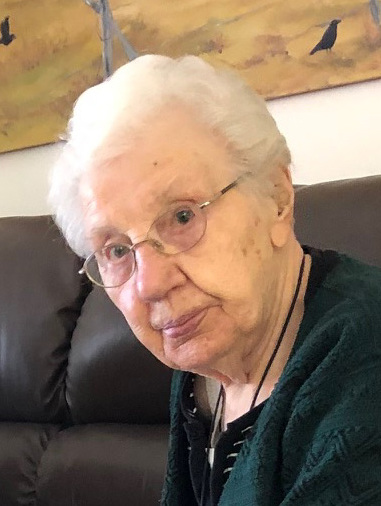 Please share a memory of Anna to include in a keepsake book for family and friends.
View Tribute Book

Due to hard times in Holland Anna’s father, Geert, a baker by trade, immigrated to Canada in December of 1928.  He was followed by his wife, Vrouwke, a seamstess, and their five children in March of 1929.  Anna was just 4 years old.  They resided in Prince Albert, Sask. until the family moved to Naicam, Sask. in 1938 where they purchased their own bakery.  The last child, Gerhard, was born in Prince Albert in 1934.  In 1941 the family moved to Bruno, Sask. to run a bakery and cafe that catered to the local dances.

Anna attended school in Prince Albert, Naicam and Bruno.  When they first arrived in Canada the children learned English in school and in turn taught their parents to speak English fluently. At the end of her schooling, Anna worked as a teller for the Royal Bank in Bruno and then as a teller at the Royal Bank in Carrot River. She quit to raise her children and then in the 1960s Anna returned to work.  She worked at the Post Office in Carrot River, and then in Arborfield as the Post Mistress for 25 years.  She retired in 1989.

Anna Arbeider married Carsten Johnson, a farmer, and together they raised two children, Dwight and Sandra.  They started with mixed farming, then raising chickens and selling eggs.  They then focused on grain farming.  After Anna and Carsten both retired, they continued to live on the farm until 2005 when they moved into Carrot River.  During this time Carsten and Anna travelled extensively including several WWII veteran reunions in Holland, trips to Australia, Hawaii, the United States, Norway, Mexico and Nicaragua to visit relatives.

Anna enjoyed socializing, dancing and playing cards.  She also enjoyed gardening, cooking, baking and canning.  She made elaborate birthday lunches complete with home-made angel food cakes and 7-minute icing. Like so many mothers of the 1950s she knitted each of her children a cowichan sweater and sewed some of Sandra’s clothes.  It was so important to her to be well dressed and to keep her hair done up at all times. Anna never took it for granted and expressed her gratitude when helped. She also enjoyed helping others. With the help and support of the staff at Pasquia Place, niece Audrey Adelman and the community she was able to live an independent, self-sufficient life for 95 years.

Share Your Memory of
Anna
Upload Your Memory View All Memories
Be the first to upload a memory!
Share A Memory